Kyle Johnson
Bakersfield, CA, United States
+College graduate slacker +Still working at a restaurant +Wishing to leave Bakersfield +In debt from college +Doing same job (as mentioned above) as before graduation from college +Want to make a lot of money by doing as little as possible +Still don't ever want do be a math teacher, no matter how many times someone asks: 1)"What was your major?" and 2)"Do you want to teach?" +College would have been a lot cheaper if I didn't go +The weather outside is phenomenal. Unfortunately, as I write this, I am an hour and a half away from home.

Let Me Introduce You... 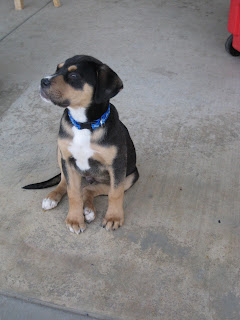 Sampson, this is everyone. Everyone, this is Sampson. First of all, I know the biblical spelling of the same name is "Samson." The dog, however, combines all of the power of Samson from the Bible, with all of the universal acceptance of being a gentile, so I added the "p" to distinguish the two. Oh, that and, when I ordered the tags, I could not recall the spelling from the Bible, so I figured that the name was just "Simpson" with an "a" and that is what I will stick with. Secondly, Sampson is half rottweiler and half lab, so he should turn out to be very awesome.

Last week, Sampson was living at the Bakersfield Animal Shelter rolling around in a cage with at least five other dogs and all of their waste. He now lives at the Lakehouse with four guys and all of our waste.

I took Sampson to the vet for his first post-shelter checkup yesterday, and he weighed in at 27 lbs. Keep in mind, Sampson is only 3 months old, so he will be a very large dog one day. My sister told me that my niece is now seven months old and still weighs less than that. Based on the past few days with Sampson, I think what he leaves on the back lawn each trip outside actually weighs more than Phoebe as well.

Sampson still needs one more shot before he can go to the dog park, so I have to wait another week before I truly know how awesome he is as a dog, but he has been pretty good so far. I have him sitting already, and he has started to get potty trained, with only a couple accidents. I will update everyone with Sampson's growth in the coming weeks.
Posted by Kyle Johnson at 8:27 AM

Too cute! Maybe I should adopt one...and then drop it off at my parents' house. Yay for a new post!